Over two years ago, the Shimano Technium line was recommended to me for my freewheel reels. Since then she has been on my Okuma Longbow XT reel and has accompanied me not only for carp fishing, but even for bottom fishing in the sea. Time to write a test about this fishing line, because I am very satisfied with it and consider it to be absolutely recommendable. 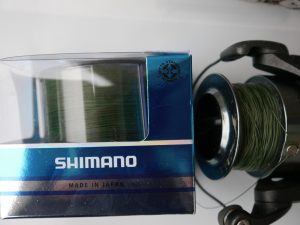 The line makes a consistently good first impression, it is rather hard but not too stiff and also slowly sinks in water. The latter has the advantage that such a bow of the cord does not form under water or the cord is driven around by the wind on the surface. The coloring is great for carp fishing, that’s how it is colored green blackto be particularly inconspicuous. The manufacturer also states that the stretch is very low, but in my opinion the line stretches significantly more than the Technium Invisitec. For buffering

In the test, the fishing line was primarily for fishing for carp at close range up to medium distances of 50 to 70 m. As already mentioned, the line sinks relatively quickly after casting and I get direct

Contact to my assembly. the Bite detection is thus positively influenced, which I like a lot. The carrying capacity of mine 0,35 mm Cord comes with 11.5 kg specifiedwhich is of course an exaggeration, but I can imagine that she holds at least 9 kg. If I had a hang in the wood, it took a lot of force to break the cord. This was never possible with the rod or reel so I can say that this line is sufficient for every carp and is not the weak point, as you can no longer build up a few kilos of pressure with a carp rod. The hooks also usually bend before the line gives up, so you can often save your assembly and only the hook has to be replaced.

The line was also hard in use on the Adriatic at fishing spots with very sharp rocks and stones, so the abrasion resistance was also tested. Of course, the line also gets a little bit rough and rough if you pull it along the edge of a stone, but after that there was still quite a bit of load-bearing capacity. Strong sea bream and conger could be fought well and the line always held despite small flaws.

I can only recommend this line to every carp angler, it is a very good alternative to anaconda and co. So in the meantime I have got myself another spool, because the old one has become relatively empty due to all the fishing and every now and then I cut the first few meters of line.